It’s hard to believe it’s been two years since publishers and platforms came together to launch the open source Accelerated Mobile Pages (AMP) Project. Speed and user experience remain more important than ever across the web, with 53% of mobile site visits abandoned for pages taking longer than 3 seconds to load. In two years we’ve seen the project grow from a few launch partners to over 25 million website domains that have published more than 4 billion AMP pages. And not only has the number of pages built with AMP grown, their speed has too. The median time it takes an AMP page to load from Google search is less than half a second. And while we’re thrilled with the impact of AMP so far, there’s more work to be done together.

After two years of websites creating over 4 billion AMP pages, we now have a concrete understanding of their effect on speed, engagement and revenue. A soon to be published Forrester Consulting Total Economic Impact™ study (commissioned by Google) found that AMP leads to a 10% increase in website traffic with a 2x increase in time spent on page. For e-commerce websites using AMP, the study also found a 20% increase in sales conversions compared to non-AMP pages.

The full study will be published in the coming weeks, but it marks the third independent research study that has found that publishers and e-commerce websites are driving more engagement and revenue with AMP.

Last week Stone Temple, a marketing consulting firm, noted an increase in traffic, CPMs, and/or increase mobile revenue across the majority of publishers and e-commerce sites they spoke to. Chartbeat also found readers engage with AMP content for 35% longer than standard mobile web content, in a report released back in June. 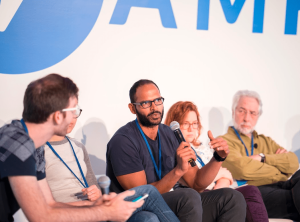 Recent data from the DoubleClick Ad Exchange indicates that advertisers are seeing better performance on AMP pages as well. 85% of publishers are seeing higher viewability and higher click-through rates on AMP pages compared to non-AMP pages. As a result, advertisers are willing to pay more for these ad placements, with 62% of AMP publishers seeing higher eCPMs on their monetized AMP pages.¹ We’re excited to see this trend continue to grow as the AMP Project makes additional investments in bringing the speed of AMP to building and serving ads on the web. Support for publisher’s existing business models is also a key aspect of the project, and since early 2016 AMP has supported paywalls for publishers on their own sites, in order to grow their subscriber base.

Powered by the community

We had the pleasure of seeing many of you at AMP Conf earlier this year in NYC. Building on that success, AMP Conf is coming to Amsterdam in early 2018. Sharing the latest developments in AMP and the chance to engage one-on-one with core contributors working on the project should make it worth the trip (even in the cold!). We’ll share the exact dates and how to register next month. And in the meantime, be sure to check if the AMP Roadshow is coming to a city near you. We’re headed to Europe in November and China in December.

The success of AMP is completely dependent on those who have contributed to the project. Whether it’s the over 400 of you who have committed code directly, or the 10,500 others who have engaged with the project on Github, AMP is what it is today thanks to everyone’s contributions. We’re also seeing other organizations take an increasingly proactive role in supporting AMP. Automattic, for example, has been working with us to improve the quality of the WordPress plug-in over the past several months. In addition to strong adoption across the community, WordPress.com VIP clients like The New York Post and PMC have seen great results with their implementations.

The future of AMP

The future is bright for AMP. Beyond the success of publishers and e-commerce websites, we’ve seen a growing number of ways for websites to utilize AMP, including the combination of AMP & Progressive Web Apps (PWA), and building an entire site across devices, with AMP. Websites like Mynet have built PWAs which utilize AMP pages to streamline development and ensure fast load times on their pages. Others, such as Spiegel Daily or Tasty.co built their entire site using AMP to ensure a great user experience across all devices.

With that, thank you to everyone who has made AMP successful, especially the over 400 of you who have contributed code directly to the project. We’re excited to see what the future of the project brings as we continue to improve the quality of the user experience across the web. We look forward to seeing many of you in Amsterdam in February. Onwards!

¹Lift may depend on ad implementation.